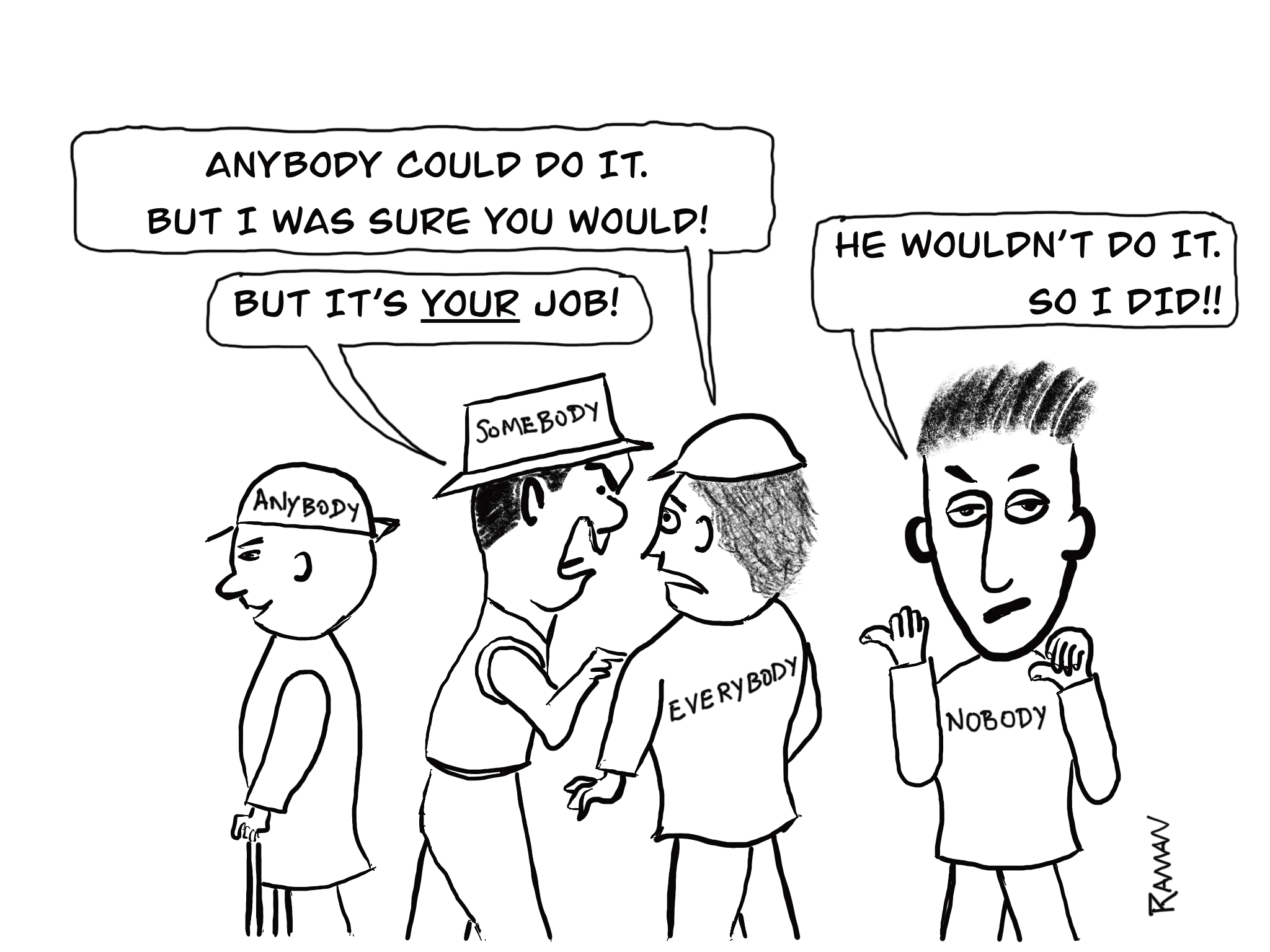 About three decades ago, I was walking the corridors at my work and saw a short yet poignant story pinned to the outside of some cubicle. I never forgot about it.

​Whose Job is it Anyway?

This is a story about four people named Everybody, Somebody, Anybody and Nobody.

There was an important job to be done and Everybody was sure that Somebody would do it.

Anybody could have done it, but Nobody did it.

Somebody got angry about that, because it was Everybody’s job.

Everybody thought Anybody could do it, but Nobody realized that Everybody wouldn’t do it.

It ended up that Everybody blamed Somebody when Nobody did what Anybody could have done.

So succinct, yet so expressive of the practical issues surrounding shoulda, coulda, woulda, perfectly knit together!

This reminds me of another story I have heard when I was a small boy.

The Case of the Missing Milk

This is set in India where it is auspicious to bathe the idol of Lord Shiva in pure milk.

Once, a king ordered that a huge vat be set up at a temple for an elaborate ceremony of such a bathing. All the merchants of the kingdom were asked to privately donate a jug of milk each by pouring their offering into that vat while praying and seeking the Lord’s blessings. The vat, filled with such donations, would provide the milk required for this special ceremony. The vat was so huge that people needed to lift their jugs above their heads to pour in their offerings.

Each merchant reasoned thus: “All the other merchants will be adding milk into the vat. If I just take a jug of water and pour it into the vat, it wouldn’t make much difference. I can save some money.”

One by one all the merchants made their private offerings, secretly applauding their own smartness.

After all the offerings were collected, the priest arrived to find a sumptuous supply of pure water for the Lord’s bath.

Is it a good example?

The question arose in my mind if the Missing Milk story forms a good example of the parable. I can see it being argued both ways, so I asked around. I got some feedback from my friends and family and the verdict is clear.

In response to my question whether the story exemplifies the parable, we have:

The biggest issue I had with the parallels between the stories is that the parable talked about a job that anybody could have done. Meaning it would only take one person to do it. Nobody did it. The milk story seems to fit better with the model that the job to be done, gathering pure milk for the bathing, could only be done if all the actors did their part.

Then I got it: the job to be done is not what I thought of initially. It can be entirely different:

Eliminate the incentive to cheat!

So, we are back to the observation that anybody could have done the revised job. Nobody did.

This premise started to lose luster when you include somebody and everybody. It is possible to account for their sentiments expressed too, but only with a little stretch of imagination. Things still didn’t gel.

The common theme, as identified by my friends and family, expresses the parallel the best: Personal Responsibility.

Brilliant, would you say?

Does this gel for you?