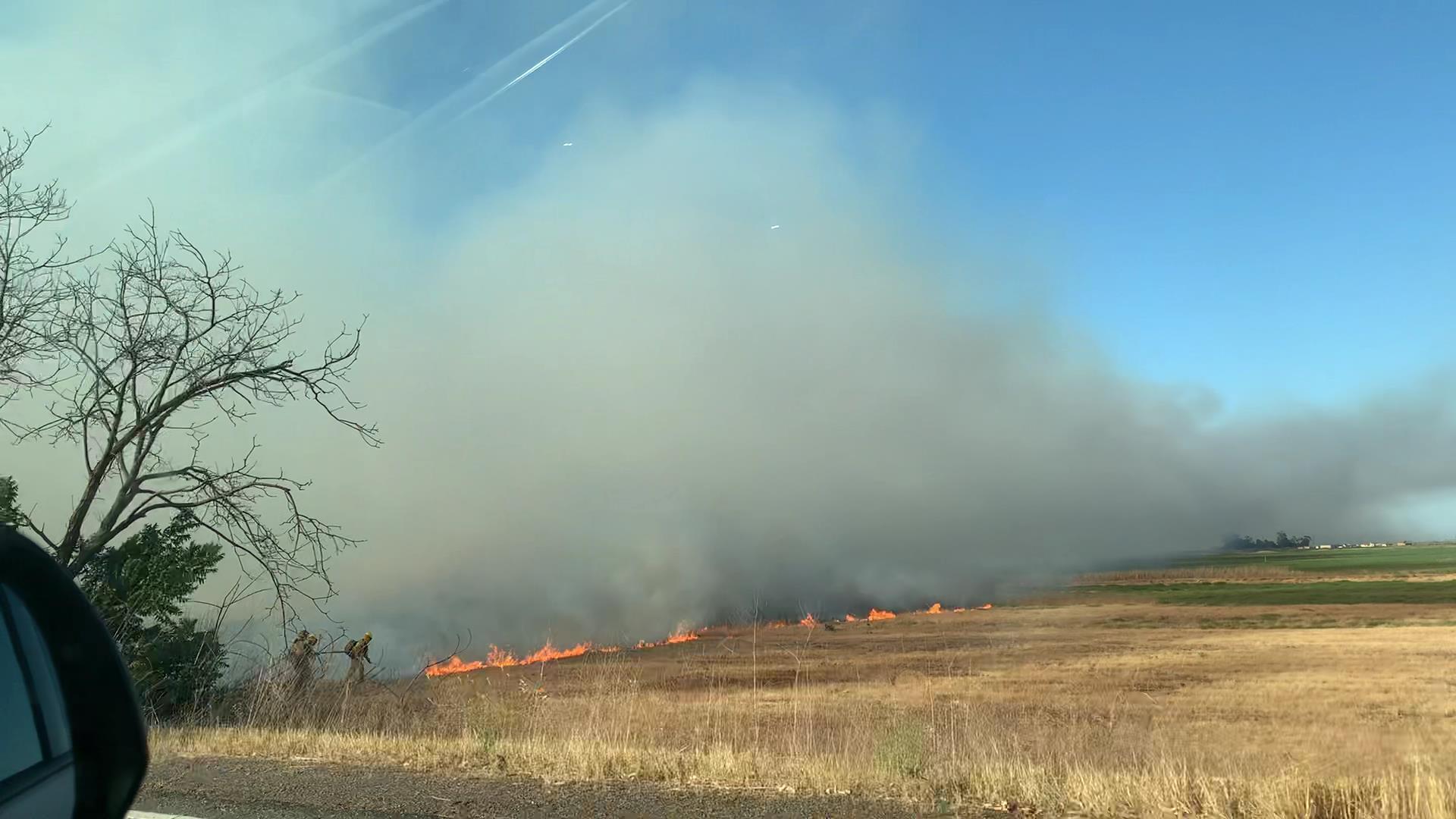 Every once in a while we do things that make us shudder after the fact. The possibilities of what could have been are sometimes daunting.

One such thing happened to my wife and me last week.

Praveena and I were on the road, driving along a segment that we have travelled many times before. An unremarkable section, if you ask me.

We were carrying on a happy conversation on the phone with our son to salvage an otherwise drab period of driving.

As we were moseying along, south of Fairfield on I-680N and approaching the Marshview interchange, we came across a captivating and dangerous sight.

We saw thick smoke. We saw it develop into black smoke.

A few hundred yards closer, we saw actual flames on the west side of 680 North, in the median. The wind was fierce and caused the smoke to scoot eastward before it had any chance of rising.

The wind kindled the flames and drove them towards the road surface. We actually saw the flames jump over the road where we would have been travelling just a few seconds later.

Slowly, and uncertainly, we took the exit and followed some vehicles eastward. That road just got us to a frontage road close to the freeway. We saw one of the vehicles, a truck which was right in front of us on the off-ramp, make a left turn and travel north braving the flames which had already spread to the brink of the frontage road by that point. It was now or never.

It looked more never than now.

As I slithered over to the stop sign at the end of Marshview Road and needed to decide which way to go on the frontage road, I started to turn left as though I was going to do the same maneuver as the truck. Praveena’s heart stopped, I am sure, for a moment. Incredulous, she was blurting out “What are you doing?” in a rather forceful way. In my usual calm and collected manner, I said nothing and did a cool u-turn, offering Praveena the best seat in town to see the flames and take a video of it using her iPhone. We got the picture above!

After I crawled back to the on-ramp to I-680 and found it hopeless in terms of offering safe passage, I did another cool u-turn right in the intersection—much to the bewilderment of the two cars stopped at the off-ramp stop line. Our eyes met and there was a visibly puzzled question arising out of the lead driver: “What are you doing?”

It was the day for that question to be hurled at me with equal intensity by two completely unrelated individuals in a span of two minutes! I dutifully indicated what I was about to do and that spurred that driver into quick action whereby she got in front of me going eastward!

At the end of the T-junction again, I made the only choice left—an inevitable turn to the right. It took me away from the fire and I felt safer. Only, the road took me in the direction I didn’t like. Eventually, I did turn around and headed right back to the troubled messy area.

Of course, I was at the tail end of the line of cars waiting to get back to the freeway. We saw firefighters beginning to get set up to fight the fire.

As we dutifully waited in line, we saw another pick up truck swiftly pass us all in one fell swoop and smoothly reach the on-ramp to I-680N and turn in there!

What? Is that allowed?

As I was pondering that question, I saw that every vehicle in front of me in the line dared the same maneuver. I promptly followed the truck in front of me, not to be left behind.

As we were approaching the on-ramp, our hearts sank. There was thick smoke with very little visibility and an acrid smell welcoming us to the on-ramp. Our solace was the truck in front of us. With a high perch if he could see things and feel safe enough to brave that landscape, who am I to complain! I confidently entered the on-ramp.

Perhaps I gave too much credit to the truck driver.

With a fire engine blocking half of the on-ramp, he was gingerly trying to find his way to the freeway. We saw him driving over actively burning brushes.

I had enough clearance behind the fire engine on the road, but wanted to make sure I didn’t scrape it. I had to be slow when I didn’t want to be.

Within a hundred feet of this ordeal lay clear skies and fresh air! We left the smoke and fire behind.

So, what’s the problem?

Our ordeal seemed to be minimal. Why shudder after the fact?

Just that fires can spread really fast (remember the Santa Rosa fire or the Paradise fire?) and all the cars on the highway were sitting ducks with nowhere to go, should the fire have gotten out of control.

But more than that, we voluntarily entered the on-ramp, expecting a quick passage through the trouble spot, but got stuck behind the truck right in the smoke and the fires still going strong, mere feet from our van.

We were able to do that because we had arrived on the scene right when it happened and the police hadn’t yet arrived to stop/reroute the traffic.

Later that night, we learned that we had escaped a two-hour closure of the road. We were very lucky to have had minimal delay and also no damage to the van due to the fire or our lungs due to the smoke.

Only, our van still stinks of smoke!